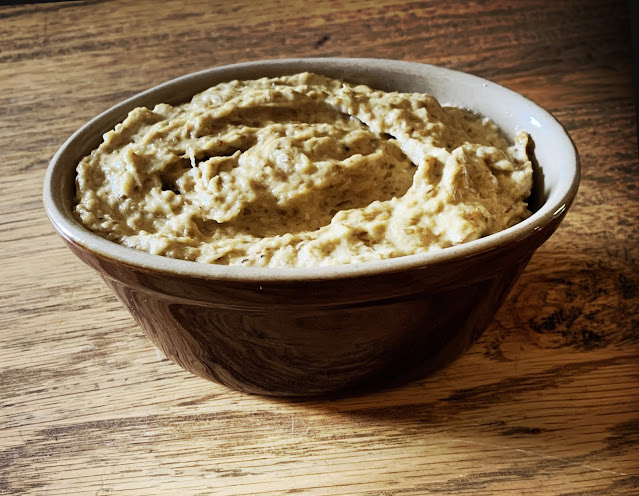 A while ago I came across a recipe for an aubergine dip being shown on television  by Raymond Blanc. Credit should go to him for this, I merely tweaked it a little.
Initially I imagined it was going to be much along the lines of the well known Baba ghanoush, or Mutable but it took a couple of interesting turns.
I decided to try it and although I usually stick to an original recipe quite strictly, initially at least, I found I really did not want to discard the liquid drained from the cooked aubergines. I utilised it and this is the recipe I share with you today.
For this recipe you will need:
2 large aubergines
200ml double cream
A tablespoon of olive oil
1 fat clove of garlic finely minced or grated
1 teaspoon of cumin seeds
1 teaspoon of coriander seeds
Salt and pepper to taste
Begin by charring the aubergines on an open gas flame, a barbecue or if you have to,under a hot grill. Turn the aubergines as they become burnt. They obviously shouldn’t catch fire at any stage, what you’re looking for is for the outer skin to become charred and blackened.
Transfer the aubergines to an oven proof baking tray and pop into a medium oven 180C, for half an hour.
Toast the spice seeds and grind either in a mortar and pestle or a spice grinder.
When the aubergines have had half an hour in the oven they should look very sorry for themselves, clearly having given up the will to live......
Allow to cool, then with surgical precision (see notes),  remove the charred skin and place the flesh in a sieve over a bowl. You’ll find this takes a little patience, but being able to extract large pieces of tender pale aubergine flesh is somewhat rewarding. Try to avoid pieces of skin joining the cooked flesh but seriously, don’t worry if the odd speck gets through, I guess it’s a form of charcoal and as such won’t harm you. Lightly chop up the  aubergine flesh so facilitate the draining of the juice. It’s important to do this simply with a knife and not a food processor because you don’t want a purée. Leave to drain for a few hours.
Now this is where I broke away from the original recipe. Raymond Blanc discards the liquid that, over a period of half a day, accumulates in the bowl. I found I couldn’t so after cautiously tasting it and finding it to have a rich, smoky savoury flavour, I decided to add it to the finished dish.
Place the oil in a small saucepan and gently fry the finely minced  or grated garlic, on a low flame for no more than a minute before adding the ground spices and the liquid drained from the cooked aubergine. Reduce this down from roughly 300ml to little more than a tablespoon of thickened liquid.
Add the aubergine pulp and continue to cook for a few minutes to fully incorporate all the ingredients. Add the cream and again cook over a low heat for a few minutes until you have a thick, creamy purée.
Season to taste. 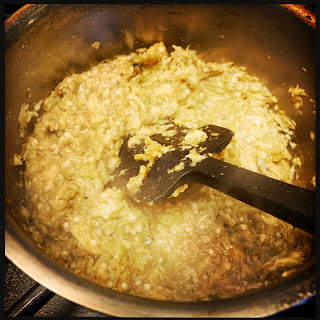 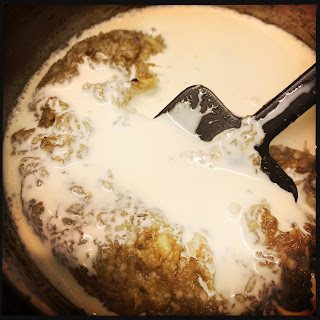 Notes;
I make no apology for the fact that this is a far more labour intensive recipe than Baba ghanoush, but I promise, once you’ve tasted it, you will certainly not mind the extra effort required.
Anyone who enjoyed dissecting frogs in school biology, I must say I was not one of them, will enjoy removing the charred skin from the aubergine, you can play forensic pathologist while you’re doing it and if you are really giddy, you can dictate a commentary into a recording device, “The victim appears to have suffered extensive third degree burns.........”
If like me, you lack the ability to have the patience which most sensible adults have, you can speed up the draining process by placing a saucer over the aubergine with a small weight on top to press the flesh (a term I believe means something entirely different in political circles)
Posted by Tôbi at 11:11 No comments: