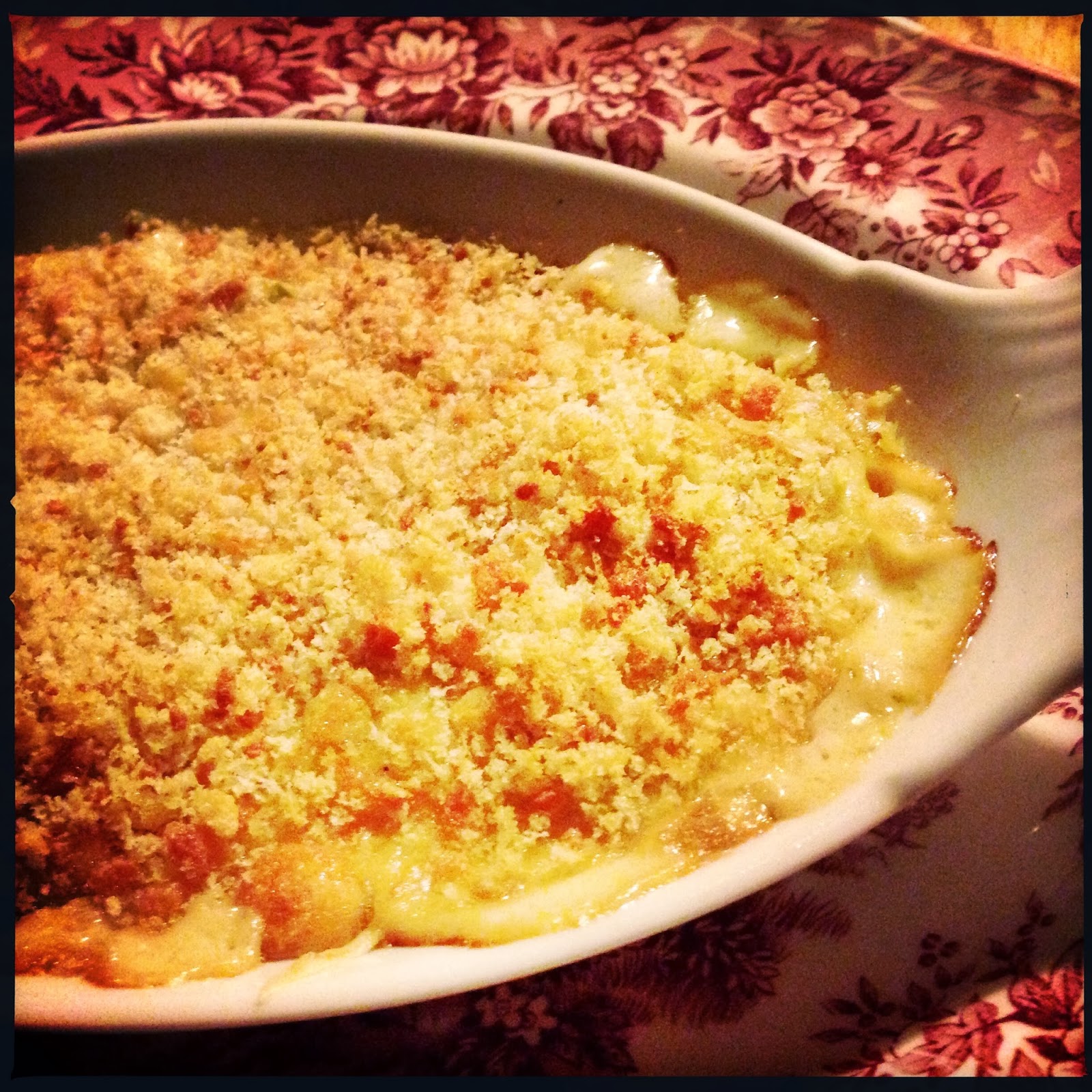 This dish makes the most delicious supper served with a crisp fresh salad but it can also be used as a rich vegetable dish to serve with a main course. The bay leaves are an important addition, use fresh if you can.


For this recipe you will need;
600g of leeks
200g of Gruyere cheese, grated
100g of bread crumbs
300ml of milk
100ml of double cream
25g of unsalted butter
25g of plain flour
3 bay leaves
Salt and pepper

Begin by slicing up the leeks and cooking gently in the milk, having added the bay leaves, a teaspoon of salt and half a teaspoon of pepper, until tender. Strain the leeks and reserve the milk. Melt the butter in the pan and add the flour, stir to form a roux and cook for a minute or two on a gentle heat to toast the flour. Add the milk from the strained leeks and cook on a gentle heat for w few minutes, whisking to form a smooth sauce. Add the cream and 150g of the grated cheese and adjust the seasoning to suit. Add the cooked leeks to the sauce and stir to distribute evenly. Add the remaining cheese to the bread crumbs and having either divided the leek mix between 4 ovenproof dishes or piled it into 1 large and shallow dish, sprinkle on the breadcrumb cheese mix. bake in a moderate oven, 180C for 25 to 35 minutes until the top is golden and bubbly. 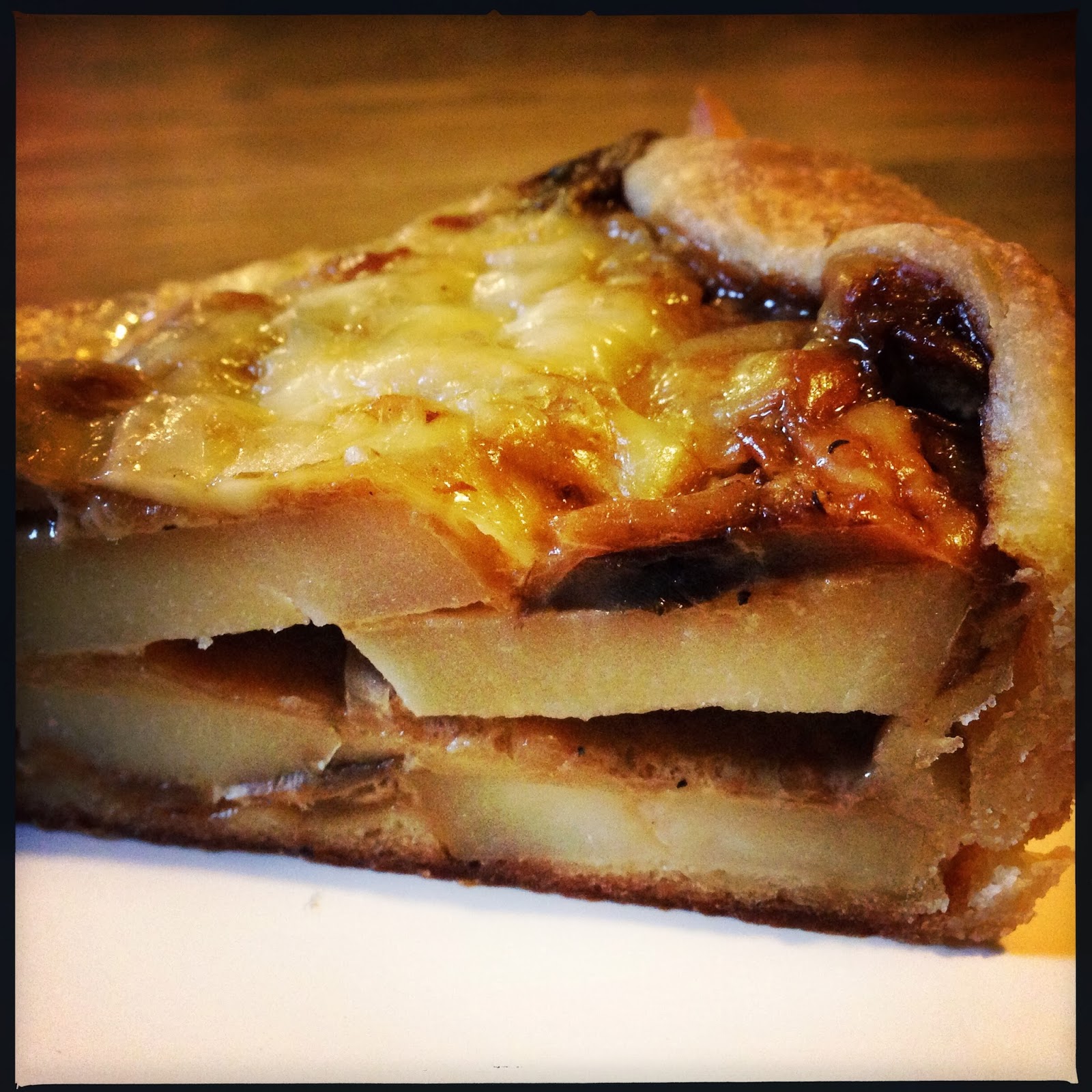 So much of what I create in the kitchen is the result of staring at left overs during the day and waking up at 3 in the morning. This morning almost the first thing I did was switch on the oven and take the portion of shortcrust pastry from the fridge. 15 minutes later I was slicing cooked potatoes, grating cheese, slicing mushrooms and roughly chopping onions. I am very fond of rolling out a piece of pastry on a large sheet of baking parchment and easing it into a favourite tart Tatin tin I have, before filling the pastry shell with fruit of some sort and easing over the excess pastry to form an edge. This seemed like a really good method for creating the shell of this savoury tart. If you don't have the extra wide baking parchment, a couple of pieces overlapping will work.

Begin by heating up the olive oil in a shallow pan and frying the mushrooms, 1/2 teaspoon of both salt and pepper, on a high heat until they have taken on a nice amount of colour. It is always important to fry mushrooms until they colour if you wish to get the most flavour out of them, no amount of boiling will do this. Add the onions and cook until translucent, finally add the garlic and cook only for a a minute before adding the Noilly Prat to de-glaze the pan. You should find all the brown patina that has formed on the base of the pan will come off and add flavour to the mushroom onion mix. Add the cream, check and adjust the seasoning, stir in and switch off the heat.
Slice the potatoes and grate the cheese.
Roll out the pastry on a large sheet of baking parchment to form a large circle roughly 3mm thick and 330m wide. Ease the pastry into a baking tin. Begin to fill the pastry shell starting with a layer of potato, followed by a layer of the mushroom mix and finishing with a layer of grated Gruyere. Repeat these layers, bring the edge of the pastry around to form an edge. I bring the edges of the baking parchment together to form a makeshift lid so that the top doesn't colour too quickly during cooking.
Bake for an hour at 180C. 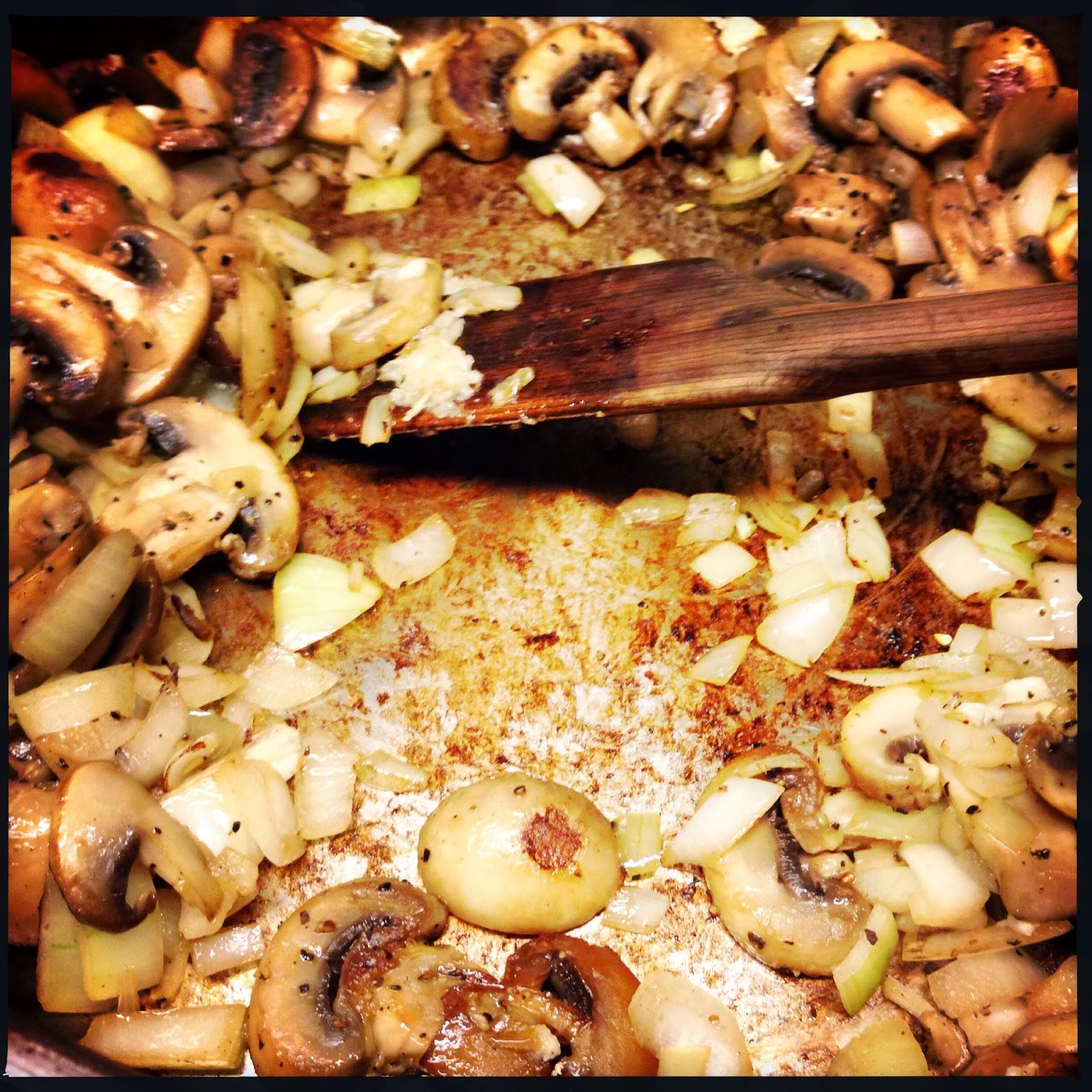 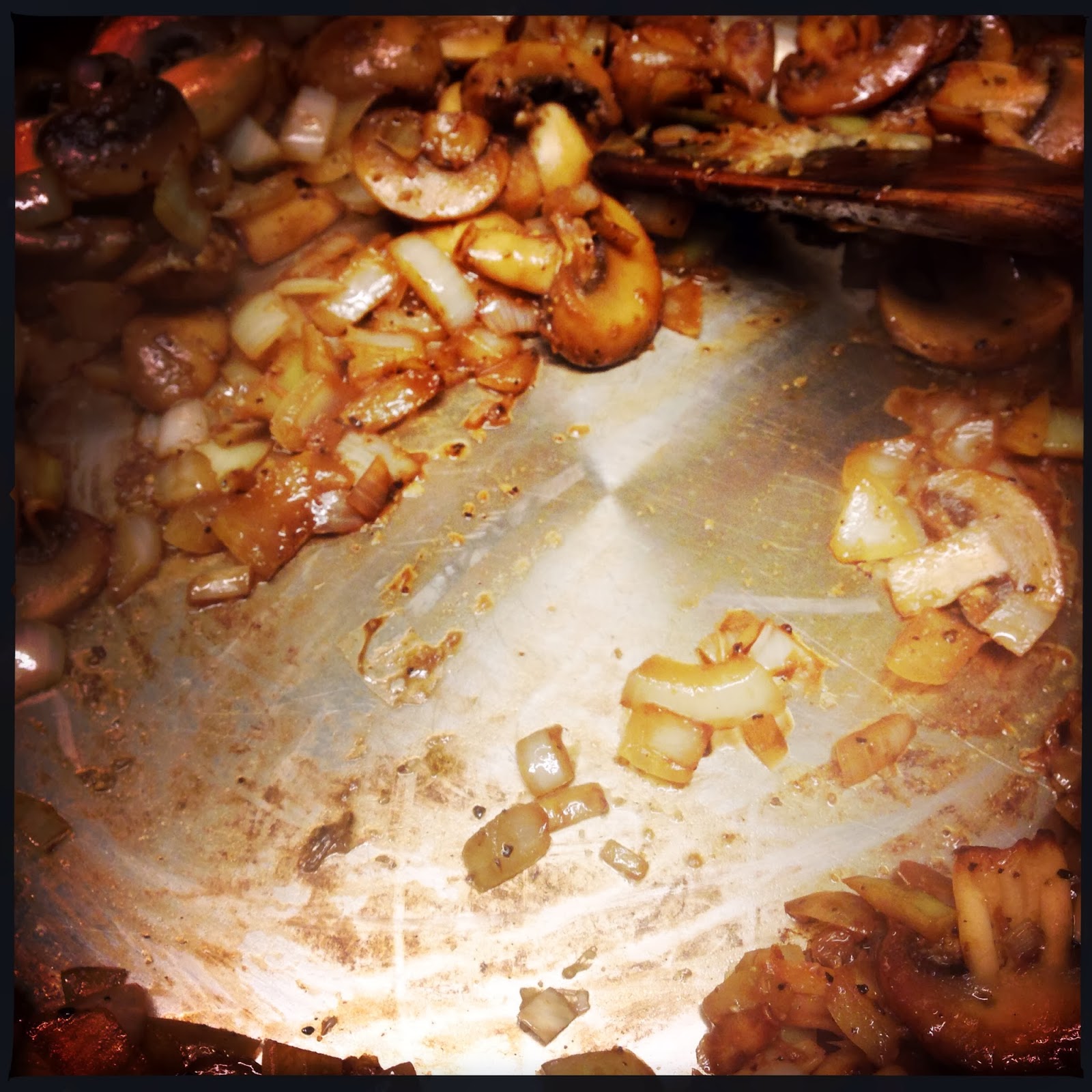 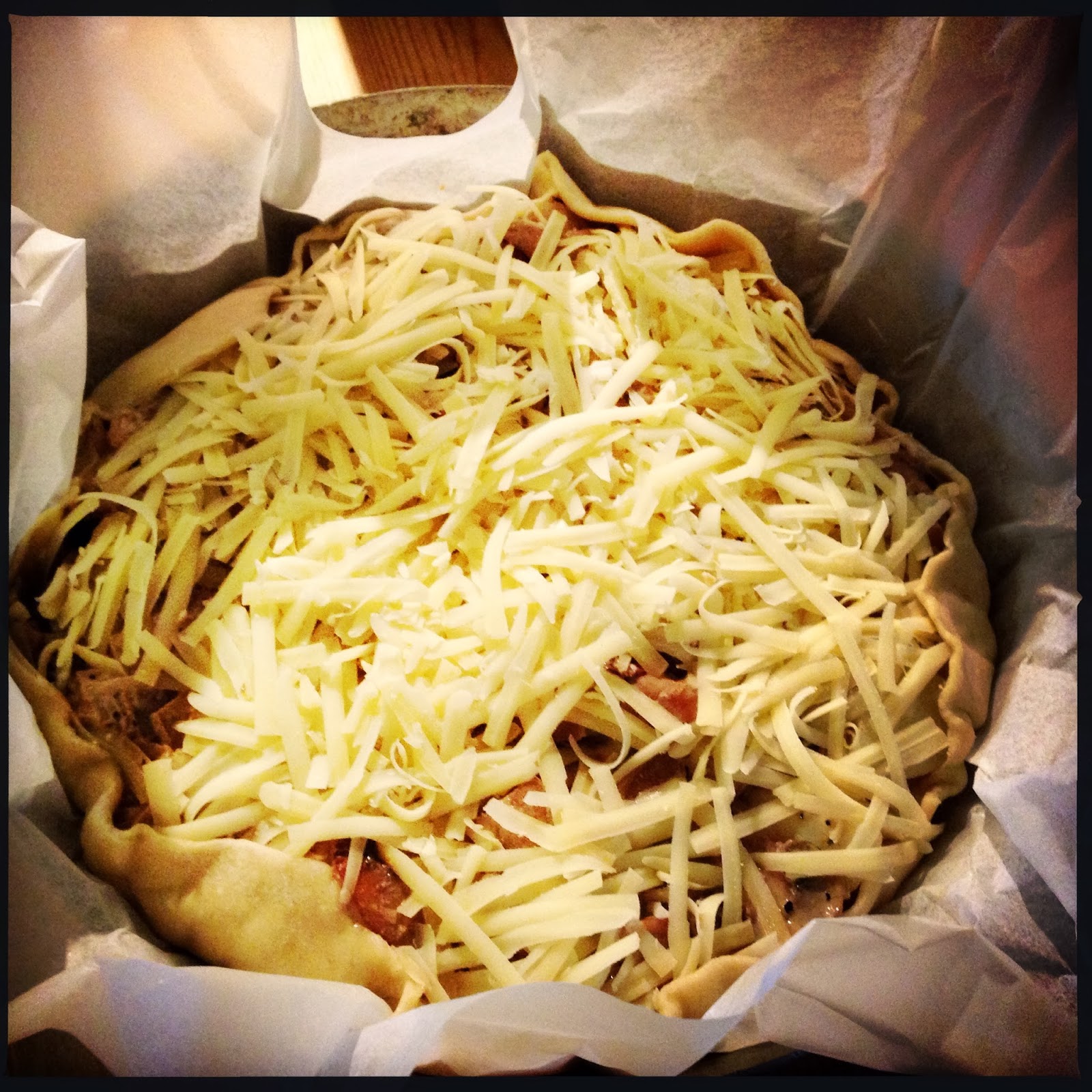 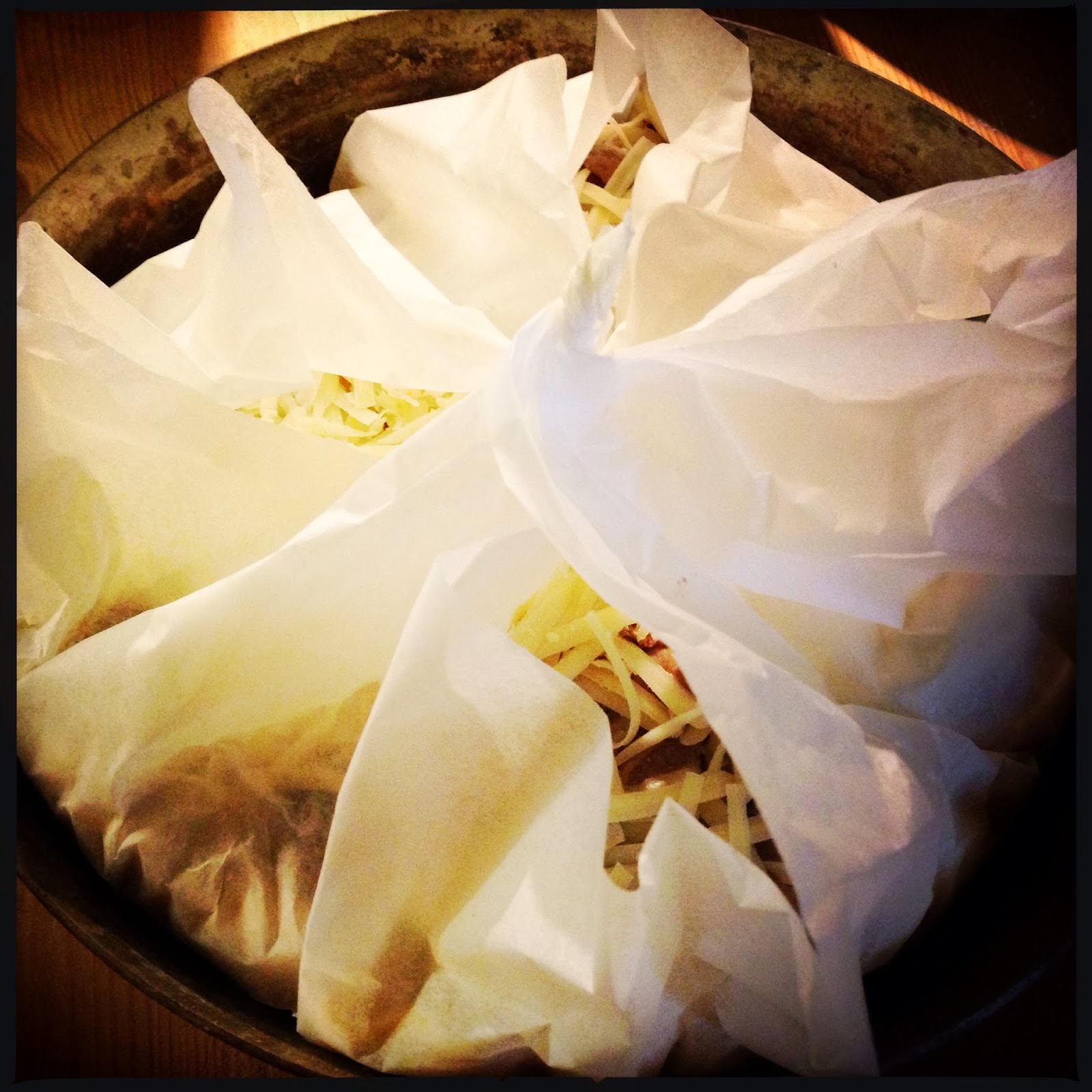 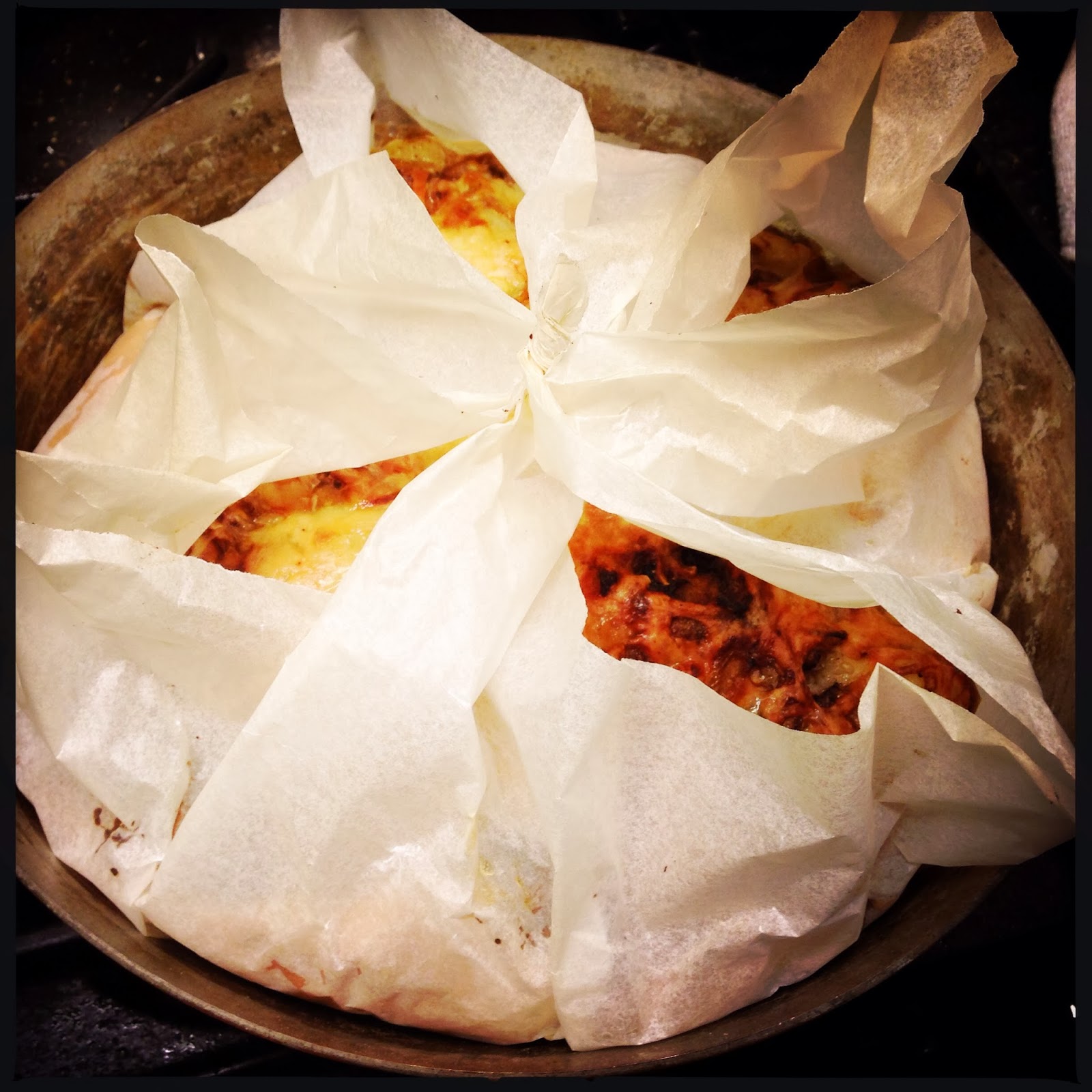 Notes :
You can of course fill this sort of tart with a mixture of potato, cheese and pretty much any other highly flavoured vegetable. Leeks for instance would be good, as would fennel, simply sweat the vegetable in a pan until tender and add whatever liquid is suitable, to make a small amount of sauce, cream in the case of leeks and perhaps a little chopped tomato in the case of fennel.
Even though the potatoes are pre-cooked, baking the tart for a full hour allows for the pastry to be deliciously crisp and for the filling to become rich and creamy. 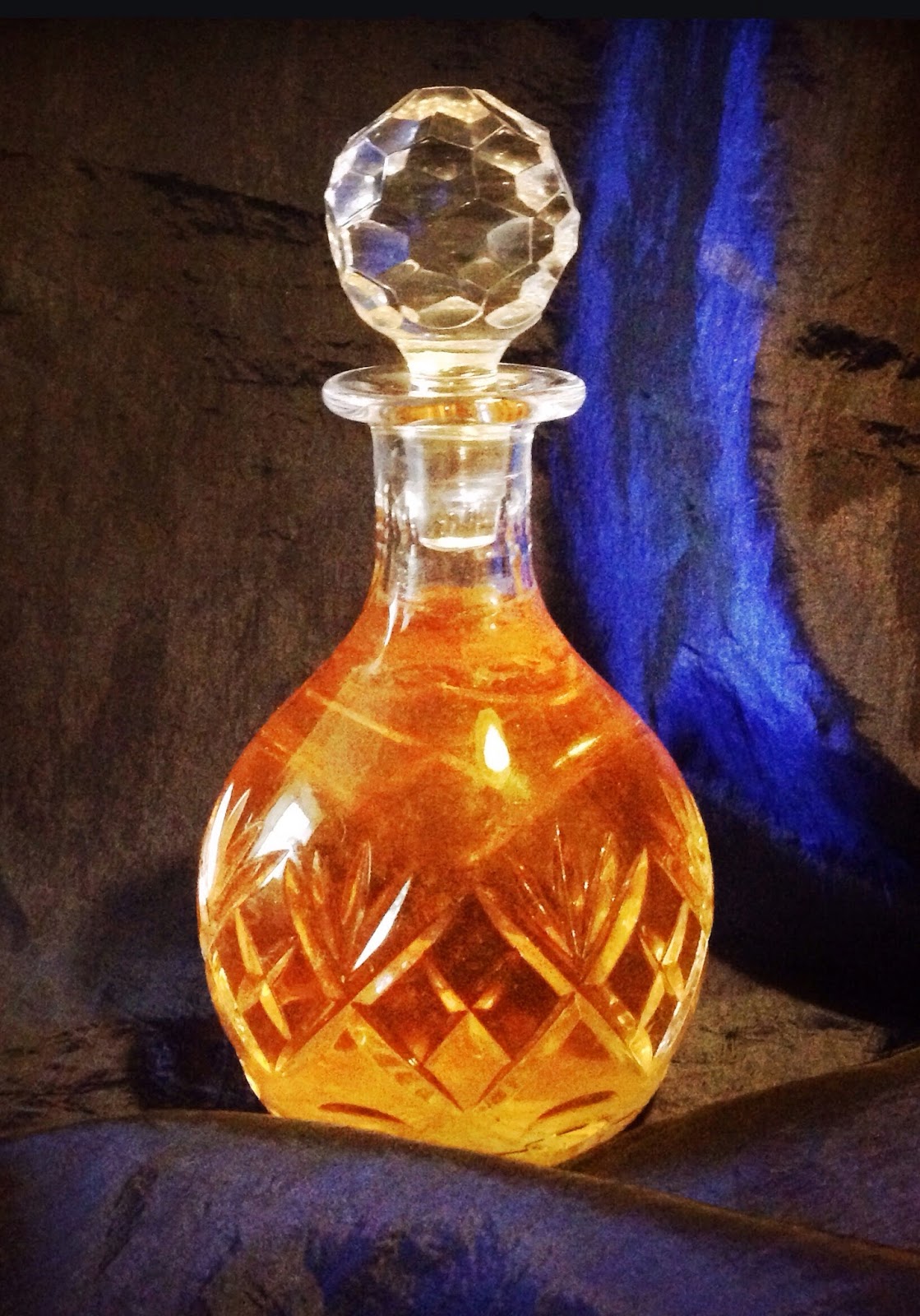 It's that time of year when the kitchen is filled with the scent of the year's marmalade being made. Last year I was keen to try something new with Seville oranges, so I came up with the idea of a liqueur. It's been in the pantry now for a whole year, I have shaken it every now and again but on the whole it has had a quiet undisturbed year. I am pleased enough with the result to share it with you and most importantly, not alter my original recipe. When trying to think of a name for this liqueur I looked for the names of people associated with Seville and came up with Velazquez, so I call this Velazquez Orange.


For this recipe you will need:
1Litre of Vodka
4 Seville oranges
200g of granulated sugar
2 cloves 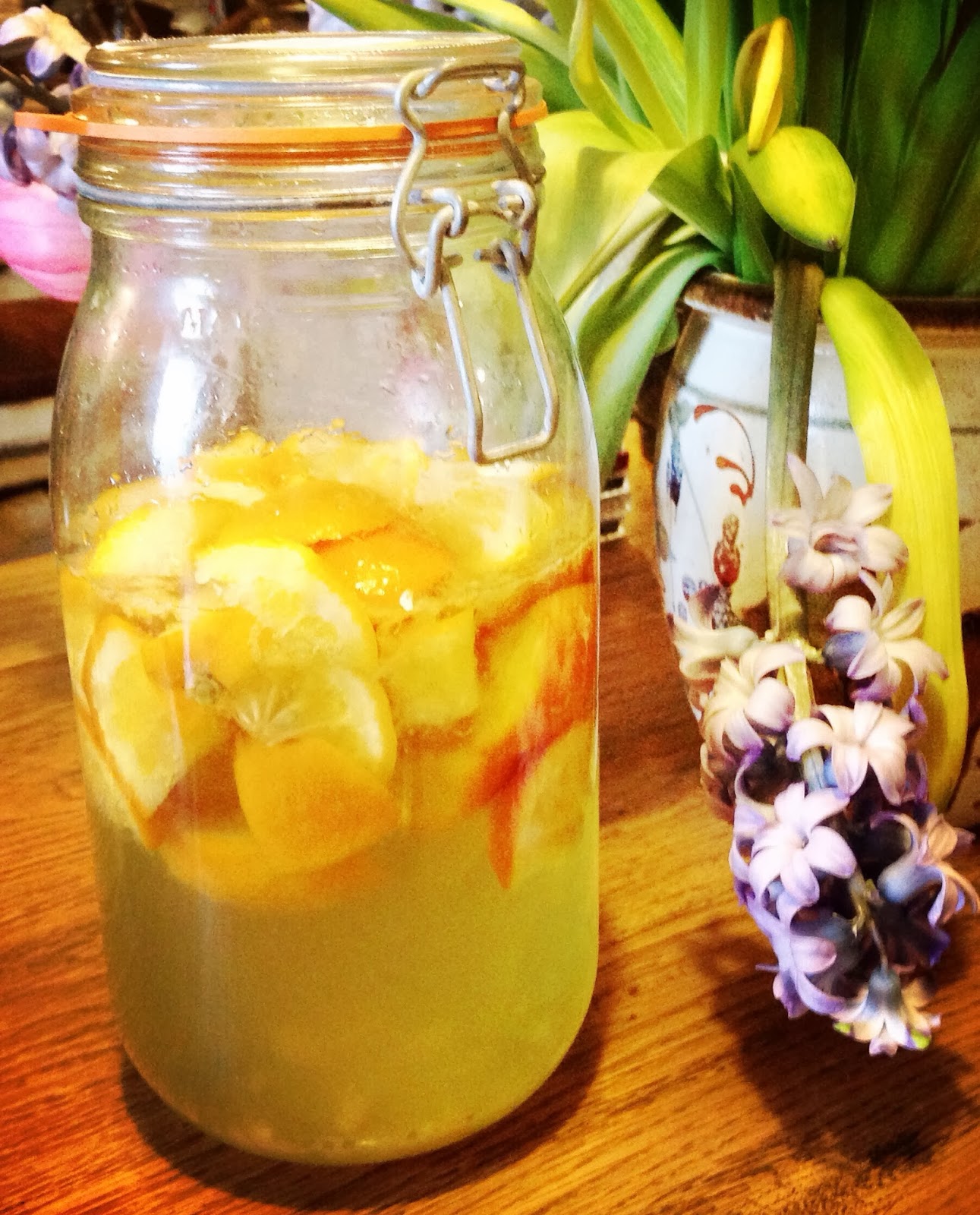 I use a 3 litre jar intended for preserves. Cut the oranges up roughly, add the sugar, cloves and vodka and seal with the lid, it's as simple as that. Time and the odd shake will do all the work.
After a year (I imagine 6 months will do) strain the liqueur off through a fine sieve and bottle.

Notes,
The use of Seville oranges allows for the final result to not be too sweet. If you have access only to other varieties of oranges, I would suggest adding less sugar, you can always sweeten the end result if needs be.
Posted by Tôbi at 09:24 No comments: 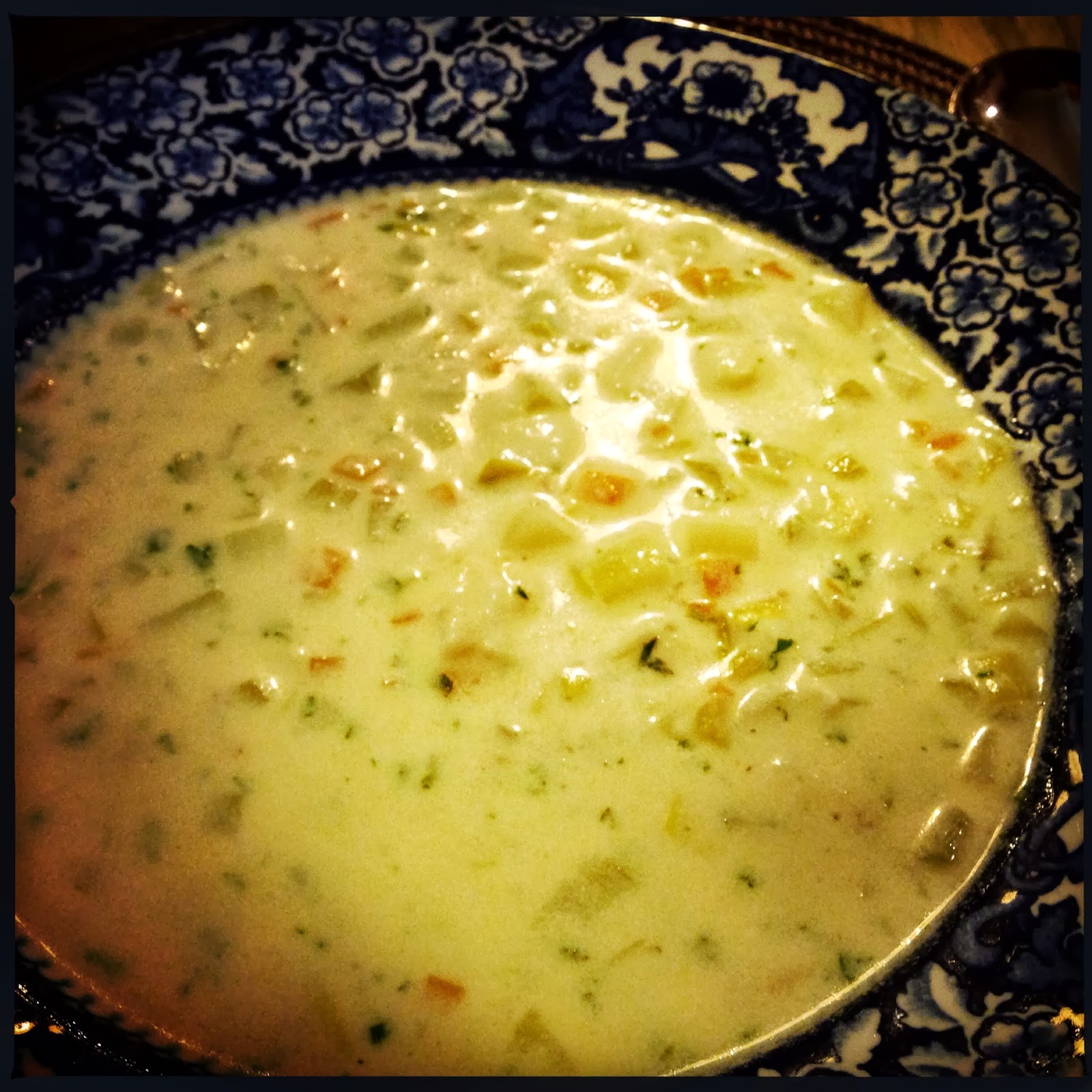 Well it's been an age since I last posted a recipe, and I am sorry about that. The initial excuse was a pleasant one, Christmas with all its house and food preparation. I brought out old favourites like the Emneth Worthies, made new ones such as my mincemeat croissant, which I will publish the recipe for soon and Turkish delight, which although successful I think I still need to work on  before sharing the recipe. The second reason for my absence has been less pleasant, a nasty cold which has knocked me sideways. Not a good start to 2014, but rescue steroids have brought me back and today, Aruba joined the list of visitors so I am inspired to mark that event and although probably rarely if ever eaten in Aruba, I am sharing my recipe for Cullen Skink.

Cullen Skink is a soup that comes from Scotland, it is rich, creamy and has smoked fish as a main ingredient. for me I find the use of fresh or dried bay leaves makes a big difference.

To make this soup (enough for 4 large portions) you will need;


Begin by bringing the fish up to a simmer slowly in the milk is a large pan, switch the heat off and allow to cool in the milk while you prepare the vegetables. You can of course finely chop the vegetables in a food processor, personally I enjoy the effort of finely dicing and the final result is certainly worth it. Dice the carrot and the potato, finely chop the leek and the onion.
Sweat the vegetables along with the bay leaves in the oil over a low heat for a good 10 minutes. It is important the vegetables don't take on any colour so keep an eye on them and stir frequently. Add the Noilly Prat and continue cooking until it has more or less cooked off. Strain the fish and add the milk to the vegetables. Keeping it on a low heat bring it all back up to a simmer, add the cream and gently simmer for another 10 minutes while you skin the fish and break up into flakes. Add the fish to the soup at the point where the vegetables are totally tender along with the teaspoon of potato flour, slaked with a tablespoon of milk. Stir through and cook for a further minute or so until the potato flour slightly thickens the soup, adjust the seasoning to taste, I use marigold bouillon powder and lots of white pepper. The fish will have already been salted so you will need less than you think. This is a soup I like to stir finely chopped parsley into at the last minute. 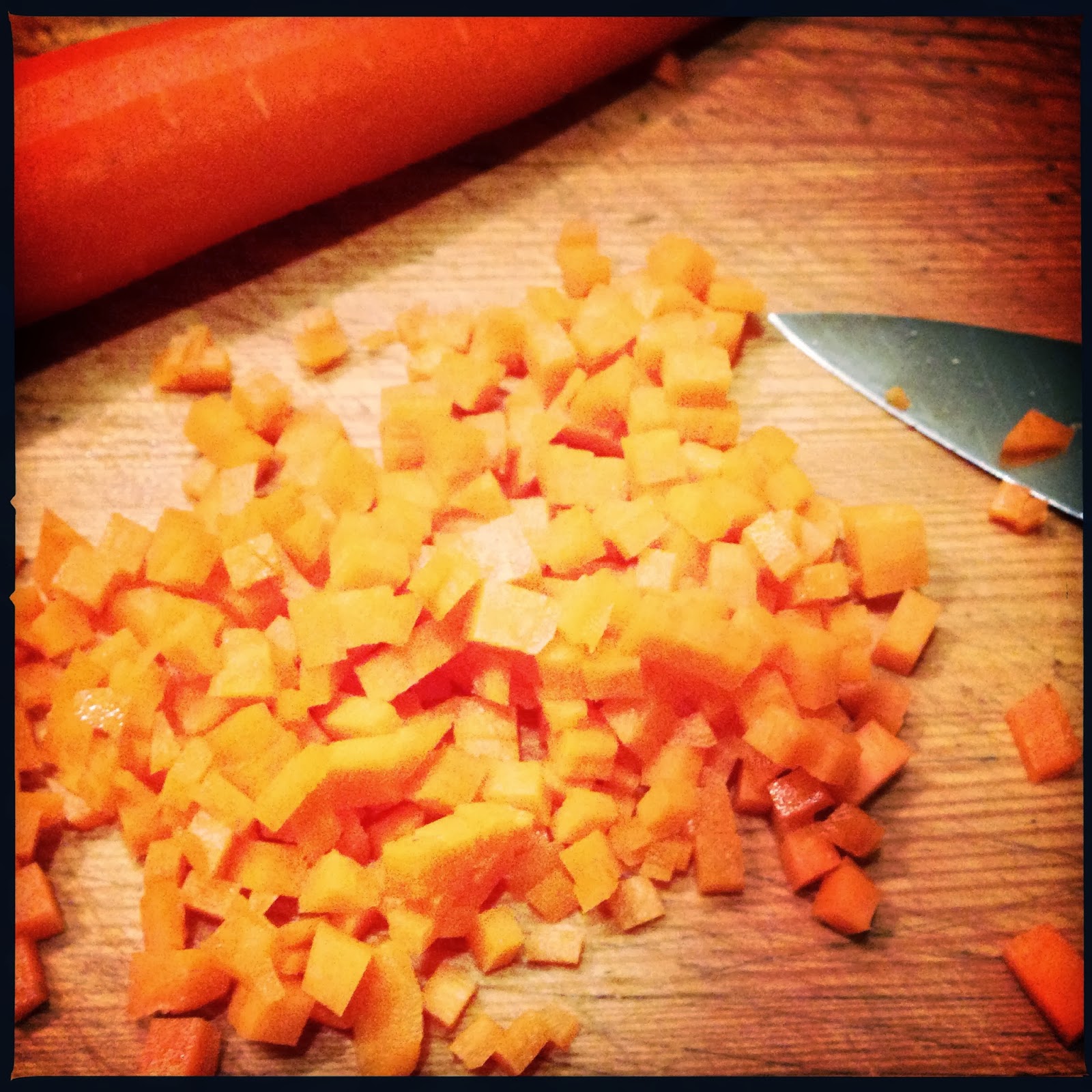 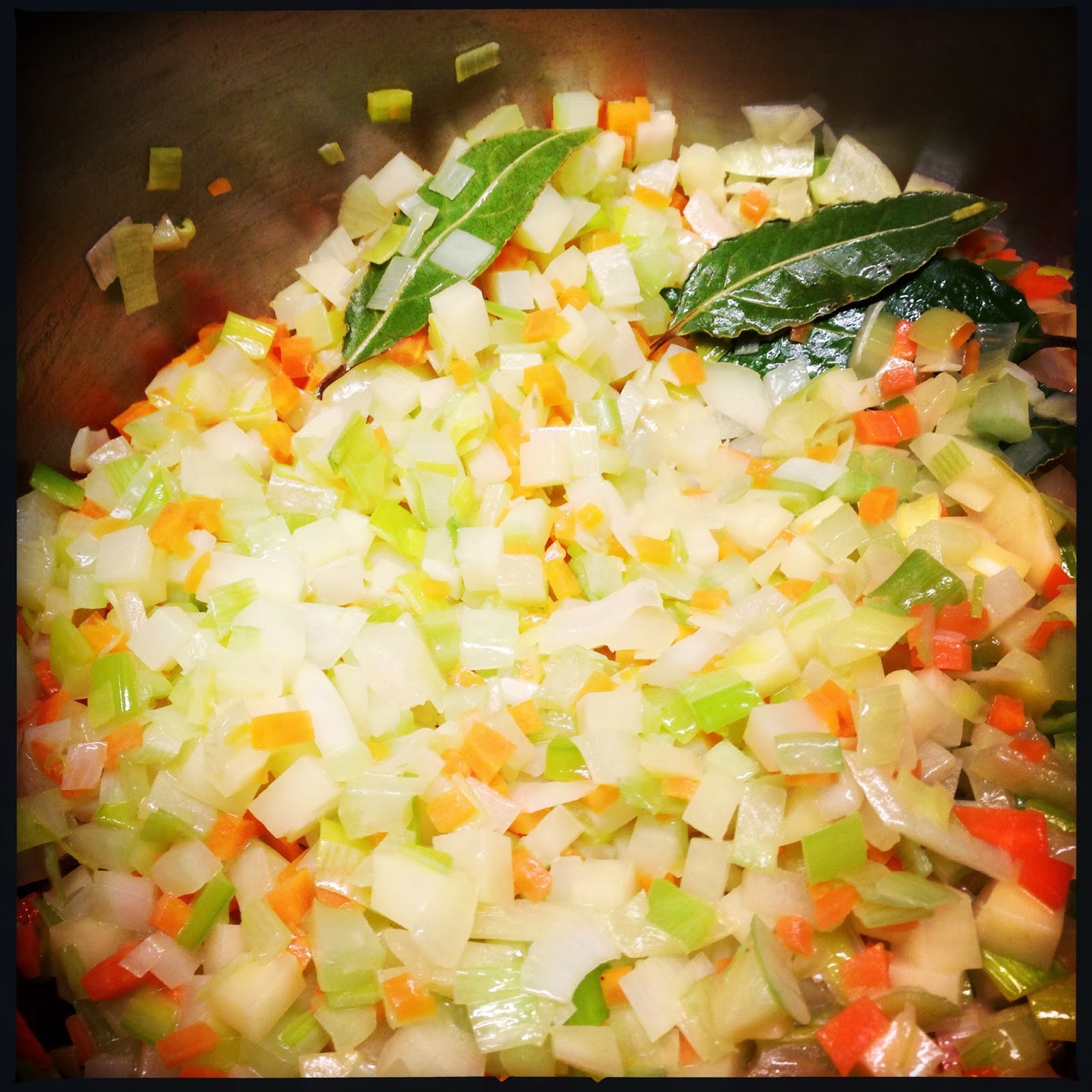 Notes:
You can always double up the amount of fish if you would like to make it more of a main course but be careful when you taste and season as of course the salt content will already be higher.