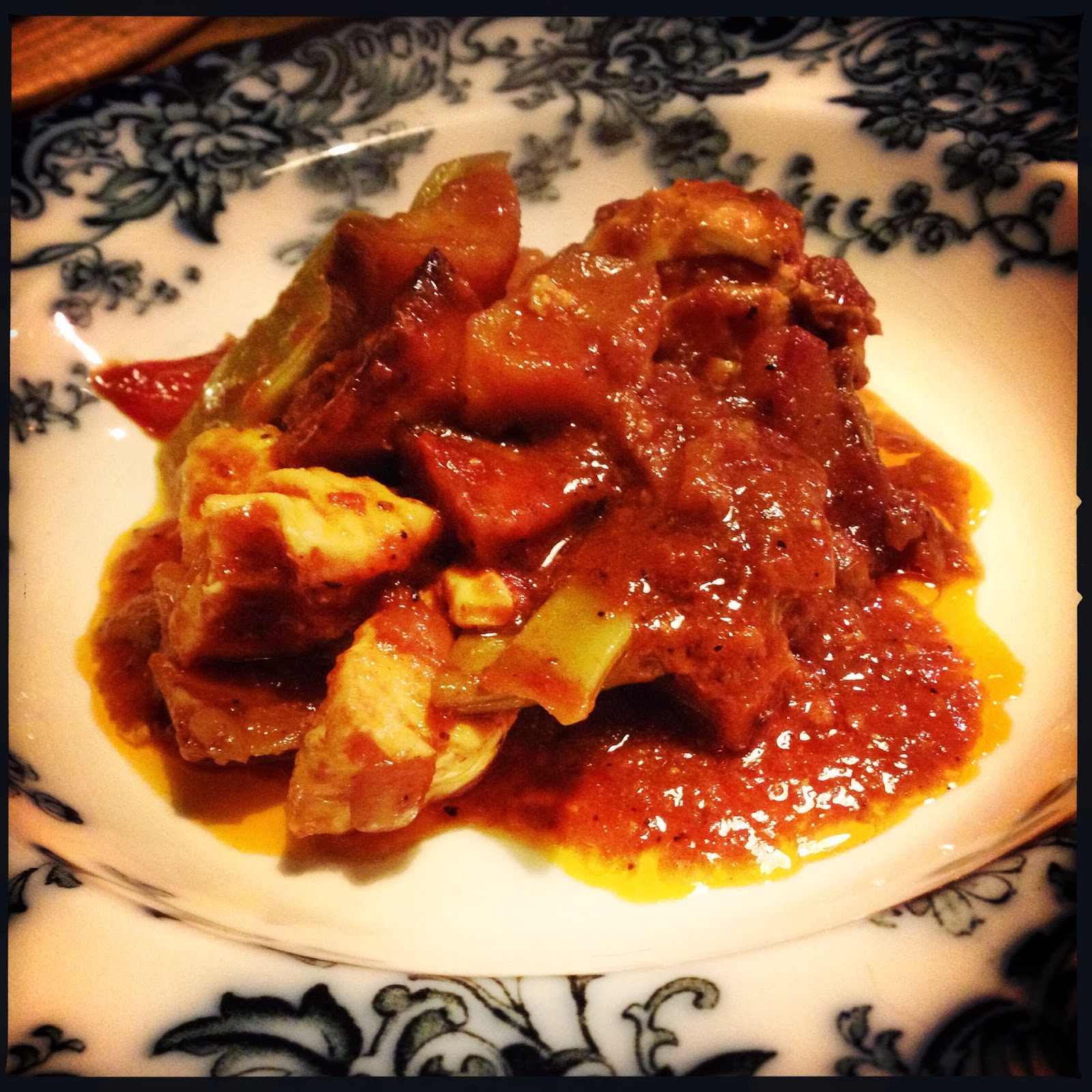 In 1983, I spent a few weeks in Barcelona in the home of a Spanish woman named Chenchi. She spoke virtually no English, I, little Spanish but somehow we got along. Several evenings a week we would go down to the market in the old part of the city where she lived to buy the where with all to make supper. Many times we would buy fish, often hake but occasionally halibut.
When I saw a splendid piece of halibut for sale at the fish monger's in King's Lynn the other day, memories of my time with Chenchi came back and planned a dish based on her's. Although this is not exactly as Chenchi made her dish, the elements are much the same.

Begin by peeling the potatoes and cutting them into chunky discs. Toss them in a little olive oil, the salt and pepper and roast them in a hot, 200C oven for 15 to 20 minutes until they have taken on a golden brown colour and are almost tender. Meanwhile fry the onion and the garlic gently in a tablespoon of olive oil until the onion is translucent and the garlic begins to turn a pale golden colour. Be careful not to over cook the garlic. Add the peppers and beans and continue cooking on a low heat for 5 minutes, stirring occasionally, until the vegetables are tender. Add the sherry and cook for a further 3 or 4 minutes until all the alcohol has cooked off. Add the chopped tomatoes, plus the empty tin filled up with water. Add the cooked potatoes, saffron, chilli and olives and cook for 10 minutes on a gentle heat, while you switch the oven back on to 200C
Finally place the fish cut up into large pieces on the surface of the stew, pour on the remaining olive oil and spoon a little of the mix over each piece to cover. Place the dish in the oven and cook for 4 to 5 minutes or only until the fish is cooked. 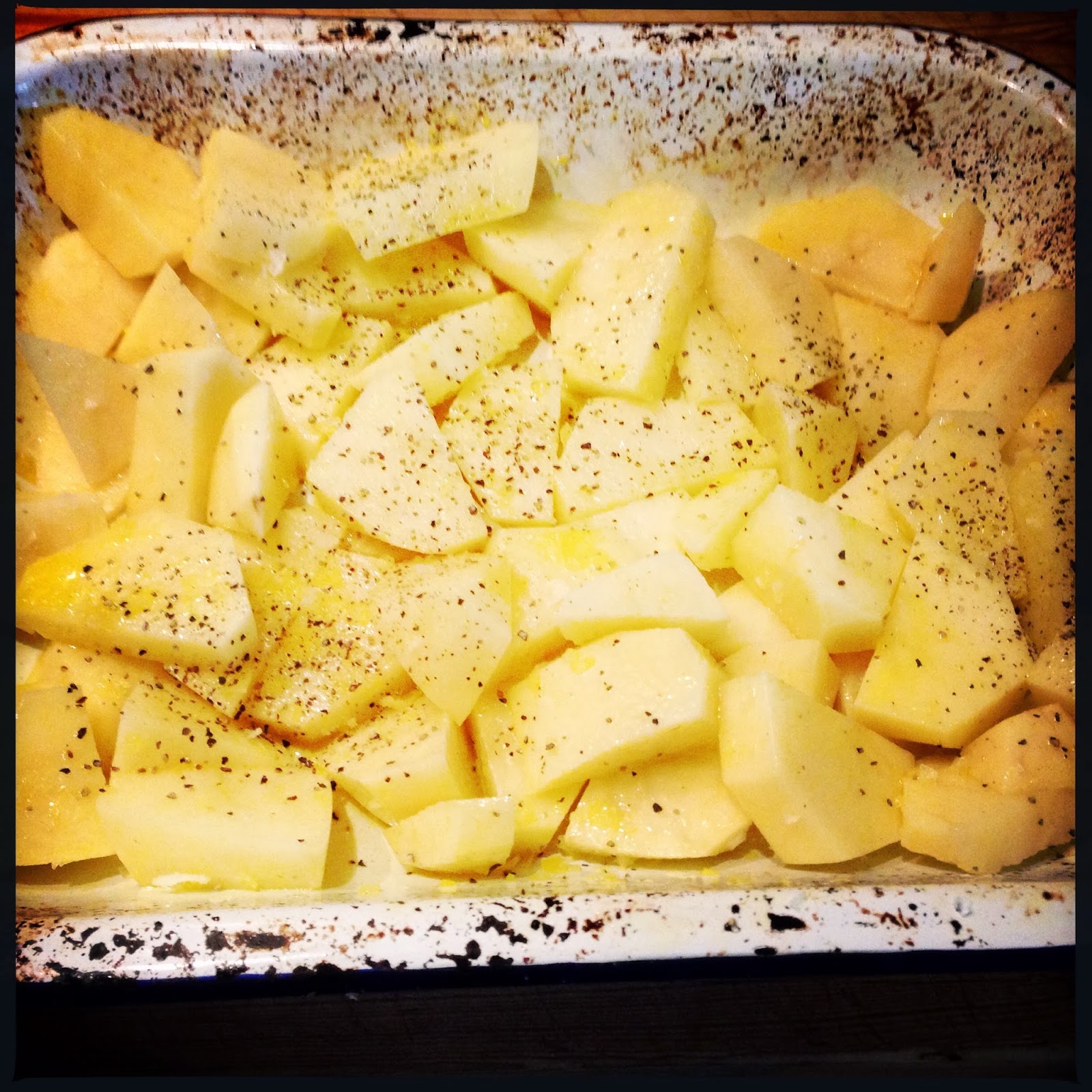 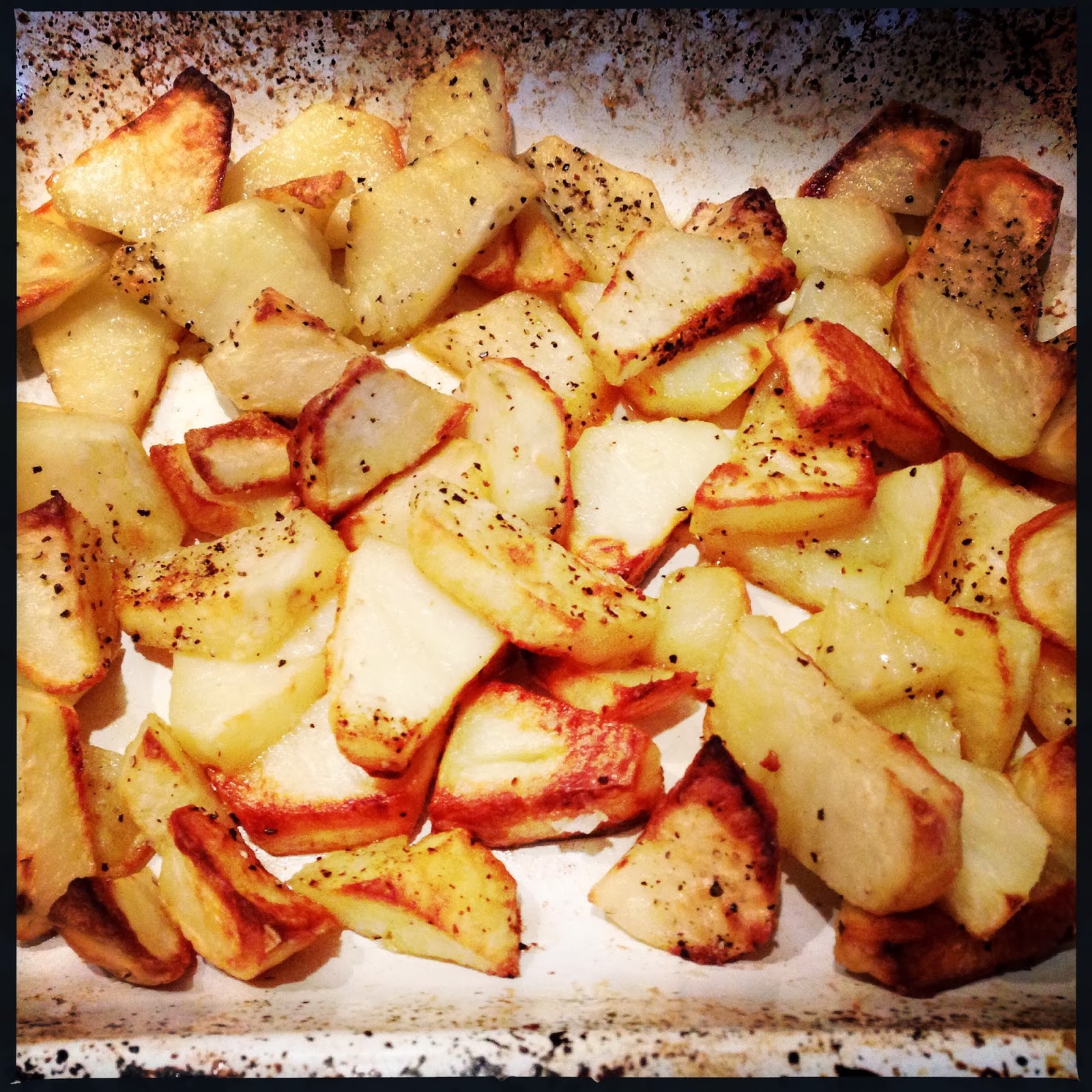 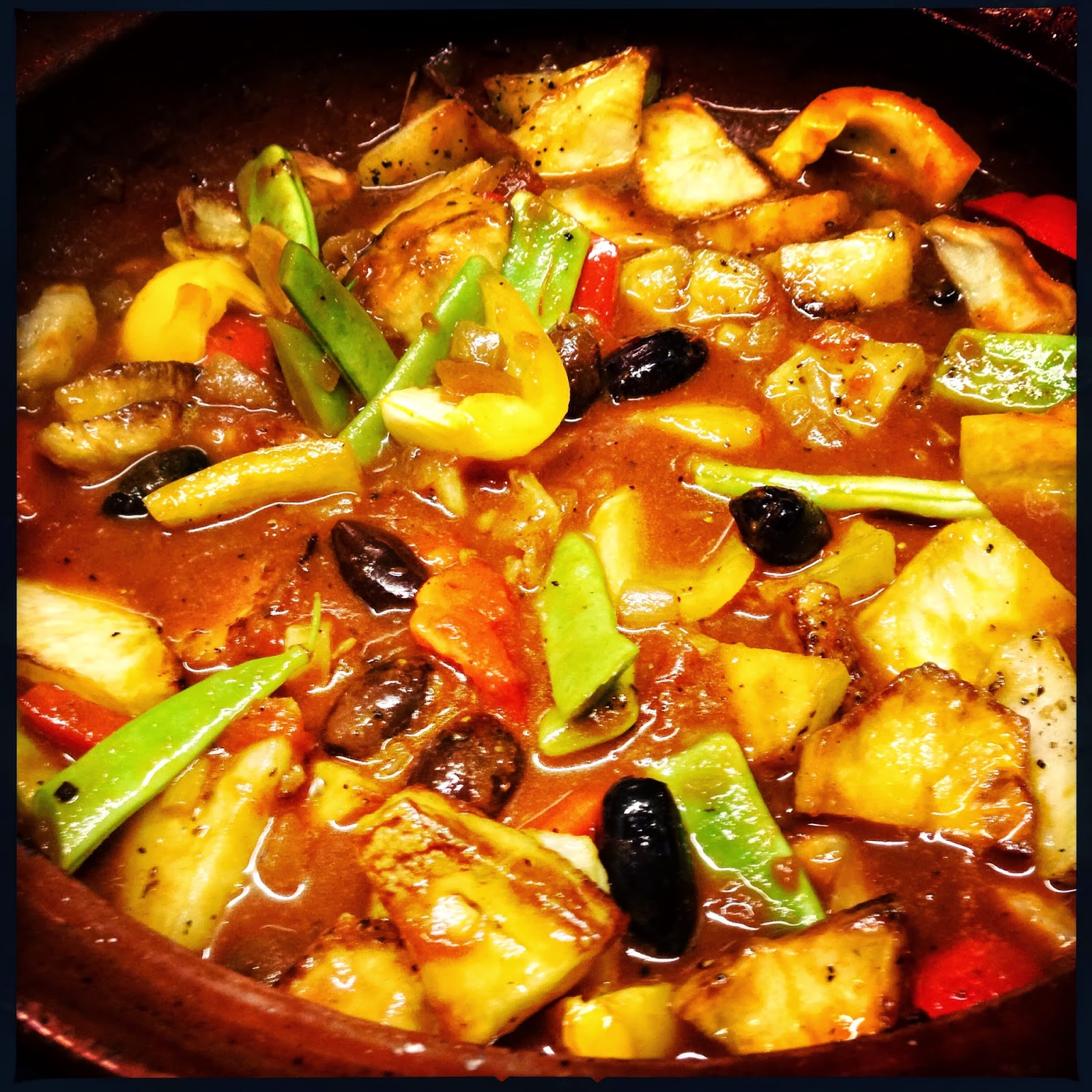 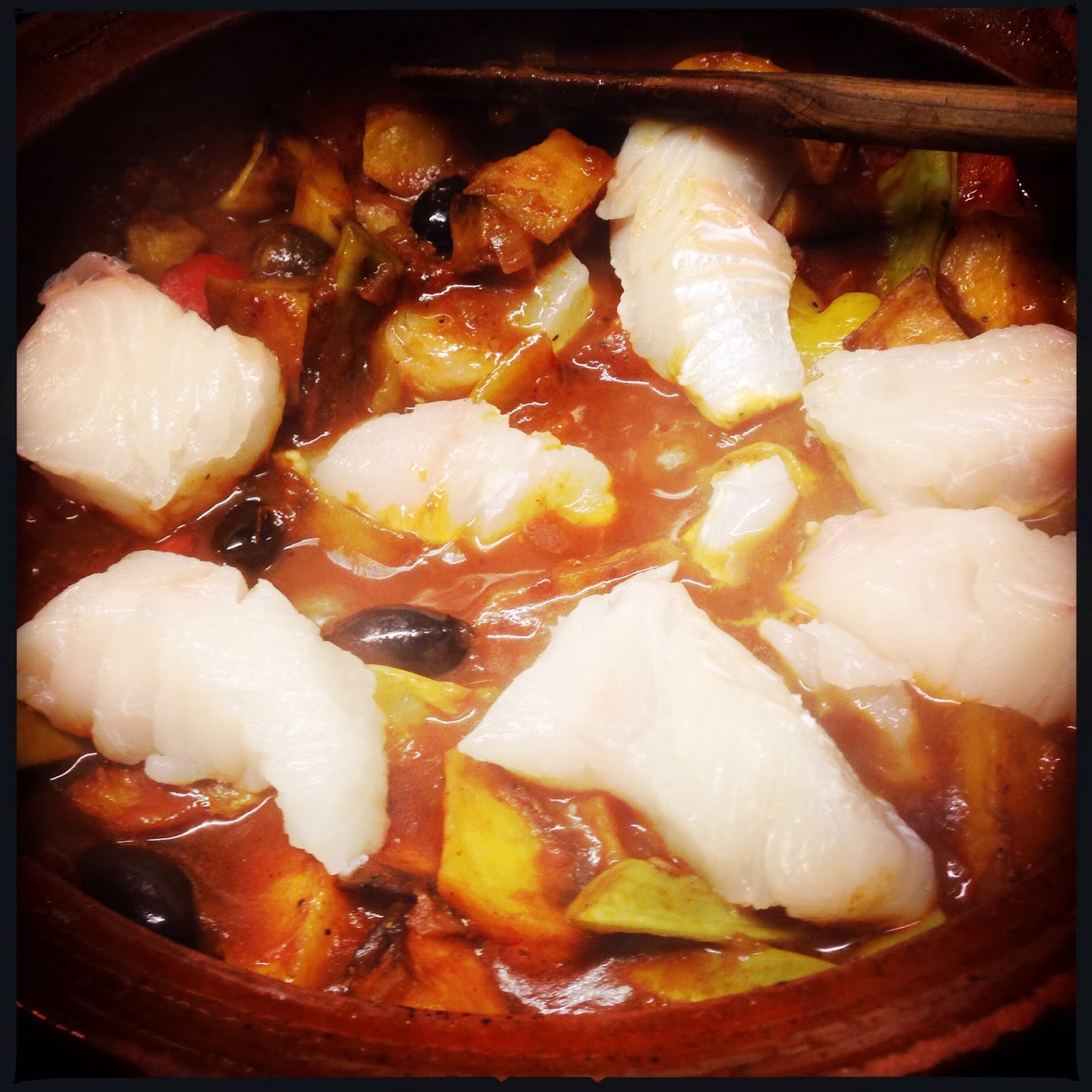 Notes:
The olive oil in this dish is important not only for the taste (so use a good Spanish one if you can) but for the unctuous texture it gives the finished dish.
I use a favourite terracotta dish I brought back from Spain 30 years ago, it is designed to go on a gentle flame and also in the oven. Any flameproof cooking vessel that goes happily into a hot oven and can then be served from will be good.
Although the crisp texture of the roasted potatoes is lost once they have been cooked in the stew, the roasting imparts a delicious addition to the final flavour.
Posted by Tôbi at 08:58 No comments: 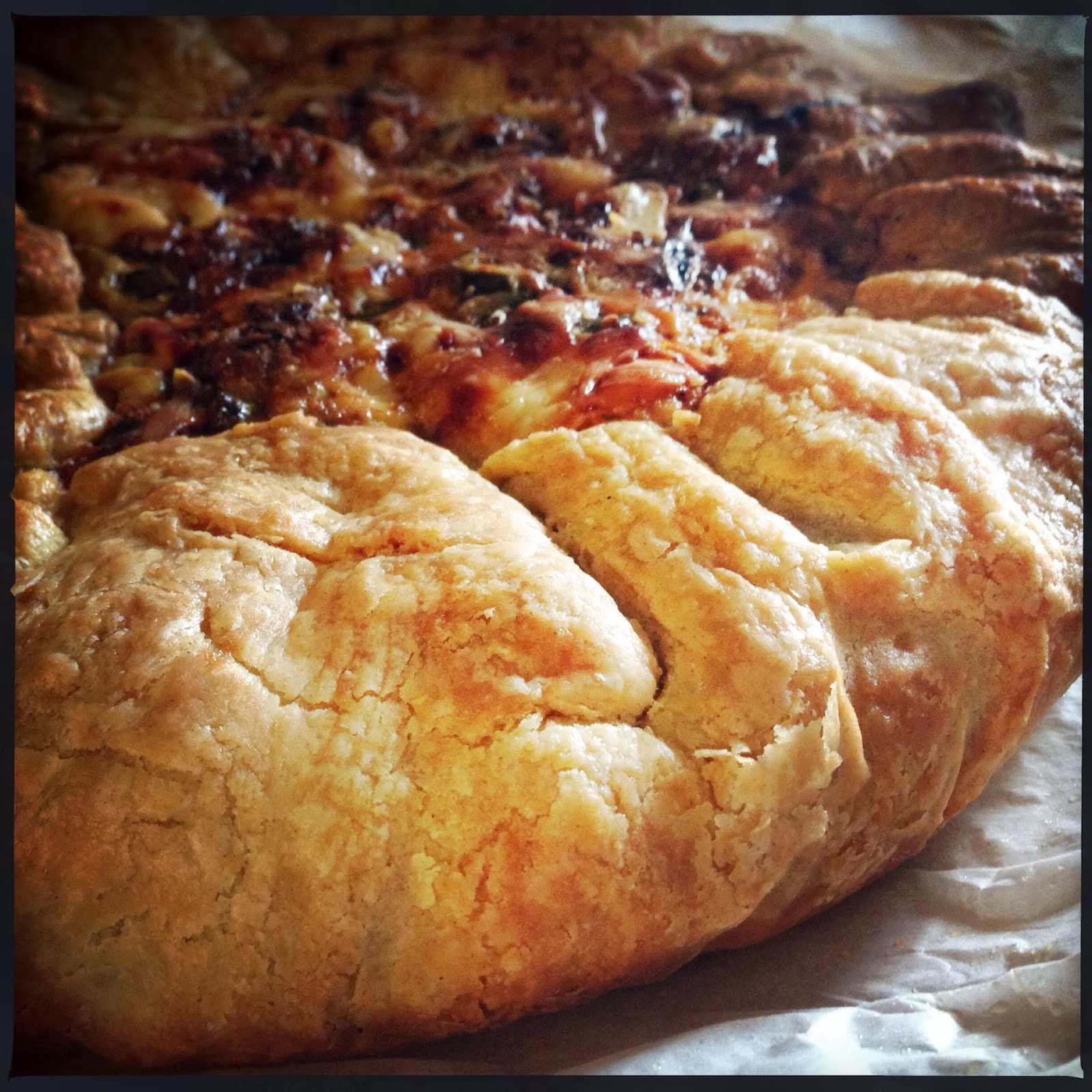 .....and of course there are potatoes. Yes another tart but by the time you will have made this and my earlier one click here for the recipe, you will be inventing all manner of delicious tarts yourselves. I rarely buy vegetables that are not in season, but when I find the supermarket has bagged together several different coloured peppers and for a bargain price, I weaken. When thinking about what other ingredients to put into this tart, chickpeas seemed a good idea and feta seemed the most appropriate cheese. No amount of oven heat is ever going to help feta to melt, so I used a little grated cheddar on the top to form a toasted crust.

For this recipe you will need;
400g of shortcrust pastry
500g of cooked potatoes
4 peppers, sliced (red or a mixture of colours)
250g of cooked chickpeas
6 or 7 spring onions, chopped
3 cloves of garlic, finely sliced
200g of feta cheese, crumbled
50g of cheddar
1 tablespoon of olive oil
Salt, black pepper and chilli powder

Begin by sweating the peppers in the olive oil on a gentle heat for 3 or 4 minutes. Add the garlic and continue to cook until the peppers are tender and any liquid which has been given off, has evaporated. You need a tender, relatively dry mix of peppers and garlic. Add the chickpeas, potatoes and chopped spring onions, feta cheese and season to taste with salt, pepper and chilli. The feta cheese is itself salty so it's best to test for your self how much additional salt you will need.
Roll out the pastry on a large sheet of baking parchment, use 2 sheets overlapping if you don't have the wide parchment. I use a tart Tatin dish  which is 28cm wide to cook the tart in and roll out the pastry to be around 35 to 36cm wide in order to form a wide edge.
Lifting the pastry up by the baking parchment, ease it into the baking tin, pile in the filling and spread out to the edges. Bring the excess pastry in to form a border, sprinkle the grated cheddar on to the exposed filling, bring the corners of the parchment over to for a makeshift cover (this helps prevent the top from colouring too quickly) bake in a moderate oven 180C for 1 hour. This allows the pastry to become wonderfully toasted and have a crisp top and bottom. There are photos on the earlier post mentioned above, which show the baking parchment cover. 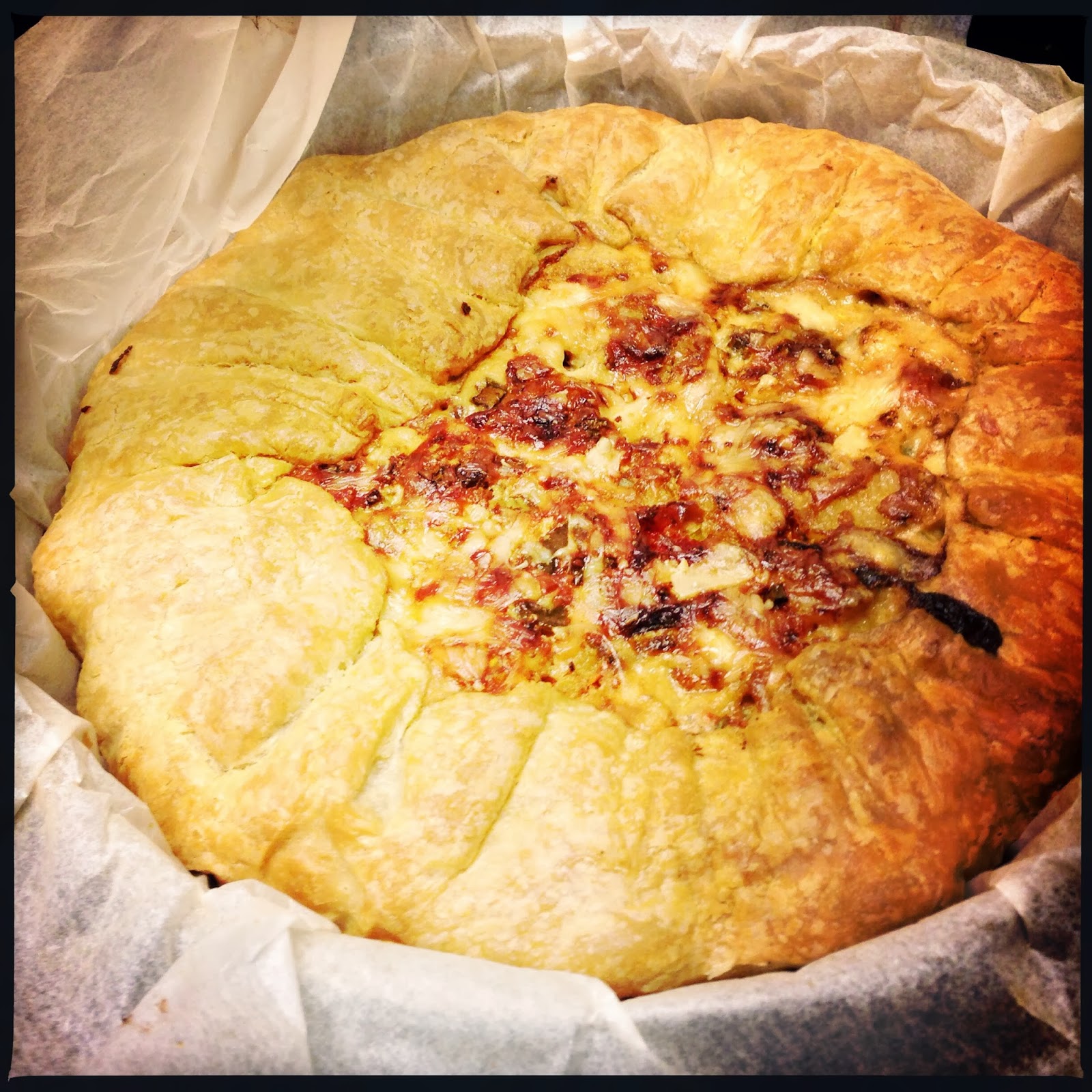 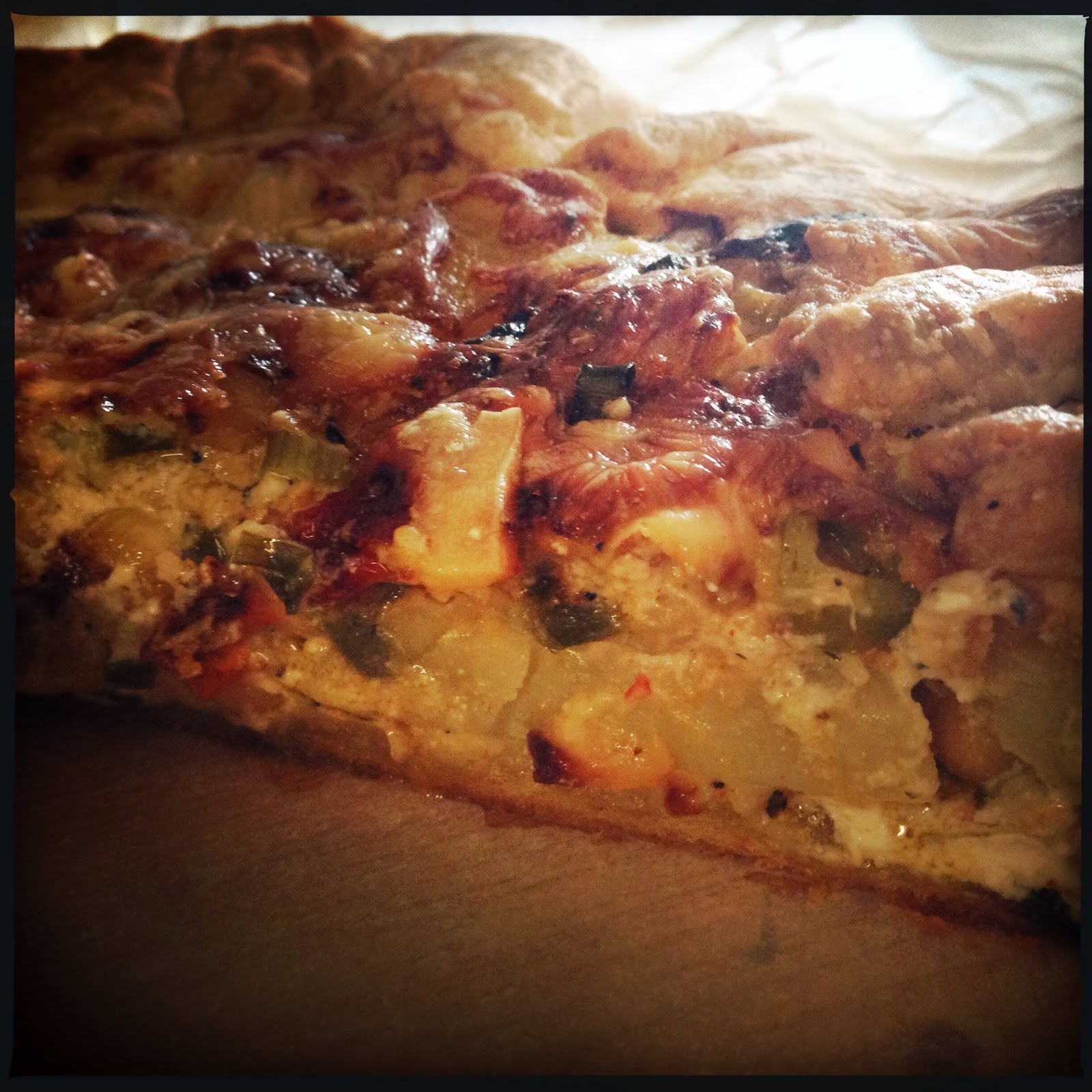 Countries and Sovereign States that visit this blog

Notes:
I will of course update this list, but if you can help by letting anyone know who lives in a country not mentioned above, please do so, many thanks, Tôbi.
Posted by Tôbi at 20:49 No comments: