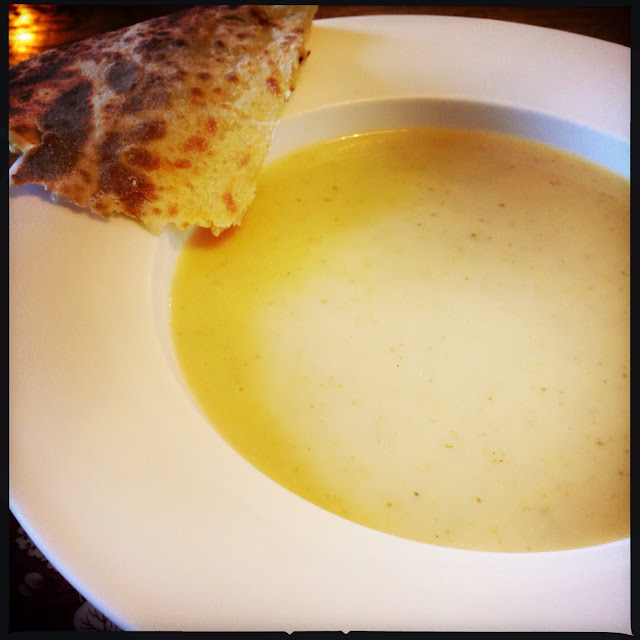 If you enjoy the zing of orange peel, you will enjoy this soup. For those of you less keen, simply remove the peel before blending and you will still have a delicious soup but without that citrus peel bite.

Begin by sweating the cubed celeriac and chopped garlic gently in the oil along with the corainder seeds, over a low heat for 5 to 10 minutes. Add the orange peel, juice and stock and bring to a boil. Simmer for 10 minutes or until the celeriac is completely softened. Blend the soup adding the butter and white pepper, for a silky texture, always be careful when blending hot liquids in a jug blender. Strain and serve.
Notes:
Personally I like the added boost of orange, leaving the peel in produces when blending, but you can easily take the peel out if you prefer a more subtle orange flavour.
I served this soup with a stuffed paratha. Parathas have become a favourite unyeasted bread in my house and I shall publish my recipe soon.
Posted by Tôbi at 11:11 1 comment: 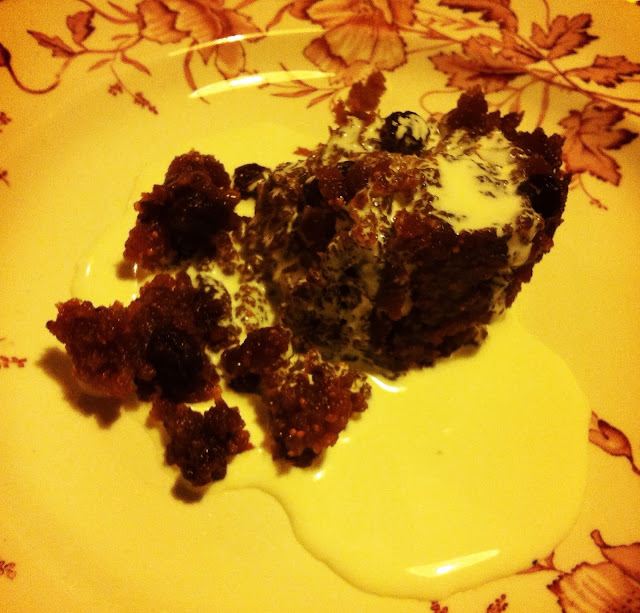 My dear sister in law, Sally told me she had searched my blog for my Christmas pudding recipe and failed to find it, having meant to put it up last year I had forgotten and so here it is. You will find many people don't like Christmas pudding and having tasted some of the dense, dark and bitter offerings even sold in up market shops, I can well understand why. Christmas pudding should and can be a rich pudding, delicately flavoured with spice and bursting with dried fruit. The fruit, rendered moist and plump from the hours of soaking and cooking in a mix containing liqueur of some sort, mine contains stout and amaretto liqueur but you can use whatever takes your fancy.
Tomorrow is fondly referred to as Stir up Sunday, it is traditionally the day when this pudding is made but I believe it's probably the last Sunday in the year when Christmas puddings should be made since the puddings benefit from a few weeks resting before the second steaming on Christmas day. I once heard Stir up Sunday being pronounced Stirrup Sunday, clearly an altogether different activity.

Begin by making the breadcrumbs, use a sturdy bread rather than a soft white loaf. I use my white sourdough (2 or even 3 days old), but a bread that has a little wholewheat flour in is also ideal. Place the breadcrumbs in a large bowl. Melt the butter and pour onto the breadcrumbs. Traditionally of course grated suet would be used but since I don't eat meat I use butter, I find melting it, is altogether the easiest way to ensure even distribution and makes mixing easy. Whisk the eggs with the stout, liqueur spices and salt and add to the bowl along with all the other ingredients.
Leave the bowl covered overnight so that the fruit can fully rehydrate before steaming the puddings.
Prepare 2 large pudding basins or a number of smaller ones if your prefer, by greasing the inside with softened butter. Divide the mix between the basins, having given the mix a final stir and making a wish. Wrap the basins with several layers of cling film and steam the puddings for 6 hours. Make sure you keep an eye on the puddings so that you can top up with boiling water whenever the pan looks as though it may boil dry. I usually pop an upturned saucer under the basin in each saucepan in order to avoid the bottom of the basin coming in contact with direct heat. Pierce the cling film once the steaming is complete in order to avoid the cling film shrinking back onto the puddings. Wrap with a final layer of cling film once the puddings have cooled.
The puddings can then be kept in a cool place for several months, I have certainly kept a pudding to use the following year. Steam the pudding for 3 hours prior to the festive meal in order to ensure a light textured deliciously rich pudding. Serve with double cream, but if your family prefer, rum or brandy butter. 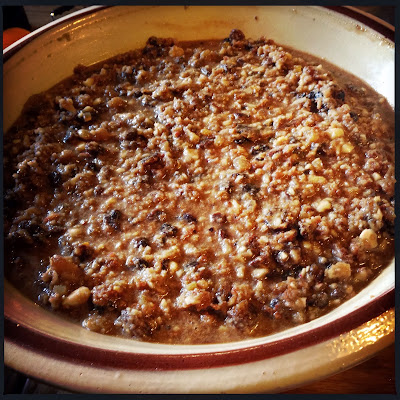 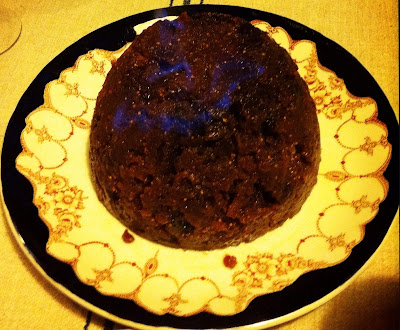 Notes:
When it comes to flaming the pudding, heat 100ml of brandy in a soup ladle immediately after turning the pudding out onto a plate ready to serve, when the brandy begins to simmer, pour it onto the pudding and light it, walk proudly into the dining room (lights dimmed) and hold your offering up high.
You can buy a product which is described as chopped candied peel, it is responsible for putting off many people and should be banned, do try to find whole peel that has been candied and chop it yourself, you will be rewarded.
Sharp eyed readers will spot fig seeds in the photos of the puddings. I have had to use last year's photos in order to publish this recipe and having included figs (100g) in my puddings last year for the first time, I have decided not to use them again. 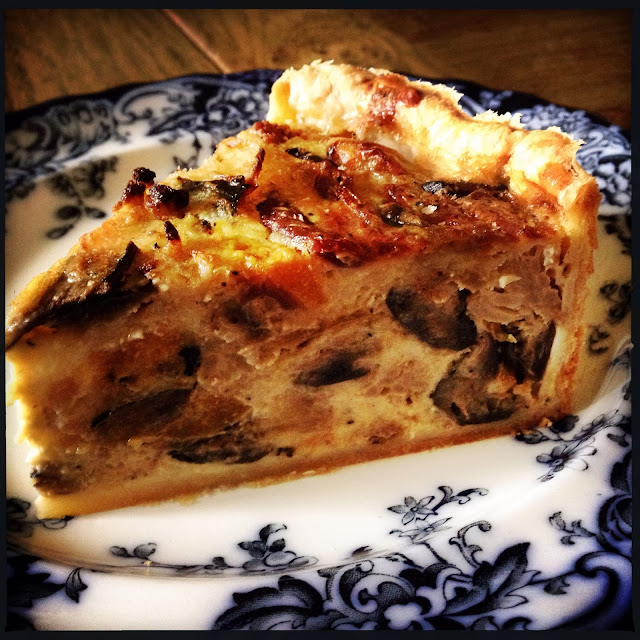 This is not so much a recipe, but an encouragement to take your favourite quiche recipe and make a deep version that has less of the custard filling. Quiches are fine of course, as long as they have a generous amount of filling and good crisp pastry, but I think there is a lot to be said for this form of tart which uses eggs and a dairy product, in this case cream cheese, to act just as the glue that holds the vegetables together and not as a main component. The result is more robust and cuts well when served at room temperature. It makes an ideal picnic food, not that on November the 4th I'm planning a picnic any time soon.

Begin by cutting up the vegetables into chunks, tossing in the olive oil, a teaspoon of sea salt flakes and a teaspoon of ground black pepper and roasting in a shallow ovenproof dish for 40 minutes at 200C. Take the dish out every 10 minutes and move the vegetables around so that the chunks that appear cooked and to be taking on colour, are moved to the bottom to allow other chunks to cook. Allow the vegetables to cool.
Switch the oven on to 180C
Line a 20cm by 6cm cake tin with the pastry and allow to rest for 15 minutes while you complete the filling.
Taste the roasted vegetables and adjust the seasoning, I find it best to season the vegetables well rather than season the egg mix. In a bowl, whisk together 3 eggs and the cream cheese, stir in the grated cheddar and finally the roasted vegetables. Fill the pastry lined cake tin with the vegetable mix and bake for 1 hour. The top should be nicely browned and it should feel reasonably firm when pressed. Cool and serve at room temperature. 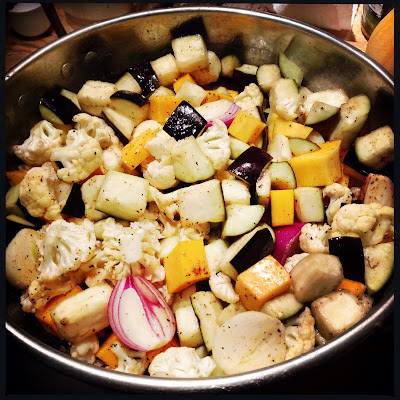 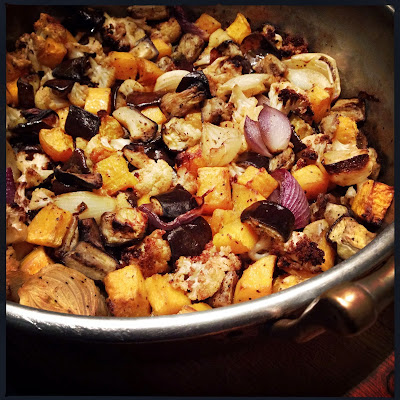 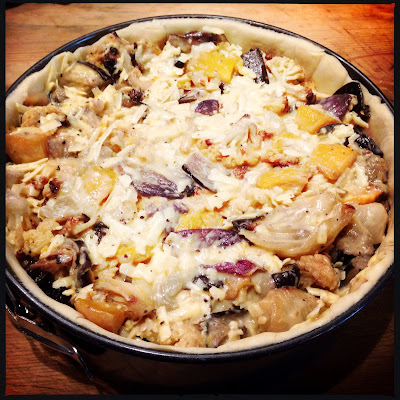 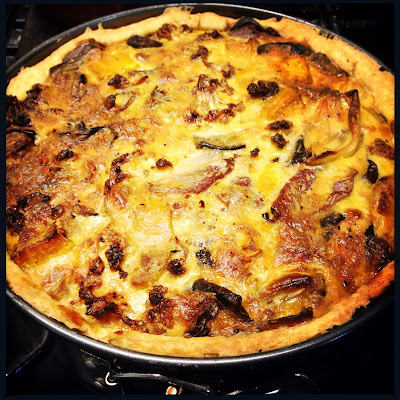 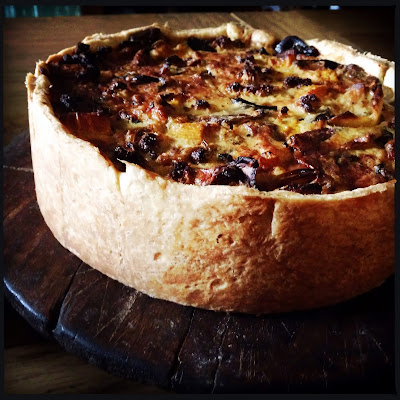 Notes:
I like to add a little heat so I add 1/2 teaspoon of cayenne to the vegetables before roasting.
This deep tart can be made with a variety of vegetables, simply prepare them in whatever way makes sense, for instance asparagus, peppers and Jerusalem artichokes are best roasted as above, whereas peas, runner beans and broad beans would be best steamed and mushrooms best fried in olive oil thoroughly until they have taken on good colour and most of the moisture has been driven off. Drain on absorbent kitchen paper before proceeding with the recipe.
Posted by Tôbi at 09:08 2 comments: